And thy Lord inspired the bee, saying:

Choose thou habitations in the hills and in the trees and in that which they thatch;

Then eat of all fruits, and follow the ways of thy Lord, made smooth (for thee).

There cometh forth from their bellies a drink divers of hues, wherein is healing for mankind.

Lo! herein is indeed a portent for people who reflect. 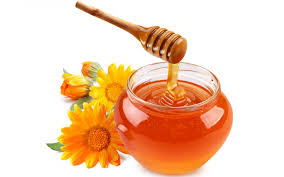 A Healing for Mankind

(in which there is a cure for men.)

meaning there is a cure in honey for diseases that people suffer from. Some of those who spoke about the study of Prophetic medicine said that if Allah Subhaanahu WaTa’ala had said, `in which there is the cure for men’, then it would be the remedy for all diseases, but He said, `in which there is a cure for men’, meaning that it is the right treatment for every “cold” disease, because it is “hot”, and a disease should be treated with its opposite.

Al-Bukhari and Muslim recorded in their Sahihs from Qatadah from Abu Al-Mutawakkil `Ali bin Dawud An-Naji from Abu Sa`id Al-Khudri that a man came to the Messenger of Allah and said, “My brother is suffering from diarrhea”. He said,

(Go and give him honey to drink.) So he went and gave him honey, then he came back and said, “O Messenger of Allah! it only made him worse. ” The Prophet said,

(Allah speaks the truth and your brother’s stomach is lying. Go and give him honey to drink.) So he went and gave him honey, and he recovered.’‘

(Healing is to be found in three things: the cut made by the cupper, or drinking honey, or in branding with fire (cauterizing), but I have forbidden my Ummah to use branding.)

Do you know how important a food source the honey, offered to man by Allah by means of a tiny animal, is?

Honey is composed of sugars like glucose and fructose and minerals like magnesium, potassium, calcium, sodium chlorine, sulfur, iron and phosphate. It includes B1, B2, C, B6, B5 and B3 vitamins changing according to the qualities of nectar and pollen sources. Besides; copper, iodine, iron and zinc exist in it in small quantities. Also, several kinds of hormones are also present in its content.

As stated in the Qur’an, honey has a feature of ‘healing men’. This scientific fact was also confirmed by the scientists who assembled during the World Apiculture Conference held on 20-26 September 1993 in China: “During the Conference, treatments with honey derivatives were discussed. Especially the American scientists expressed that honey, royal jelly, pollen and propolis (bee resin) had the property of curing many illnesses. A Romanian doctor stated that he tried honey on cataract patients, and 2002 out of his 2094 patients recovered completely. Polish doctors also informed that bee resin helped t cure many diseases like haemorrhoid, skin problems, gynaecological diseases and many others.” (Hurriyet Newspaper, 19 October 1993)

Nowadays, agriculture and bee products has become a new branch of research in countries advanced in science. Other benefits of honey may be described as below:

Easily digested: Because the sugar molecules in the honey can convert into other types of sugar (fructose to glucose), the honey is easily digested by the most sensitive stomachs despite its high acid concentration. It also helps kidneys and intestines to function better.

Has a low calorie level: Another quality of the honey is that, when it is compared with the same amount of sugar, it gives 40% less calories to the body. Although it gives great energy to the body, it does not add on weight.

Rapidly fuses into blood: When accompanied by mild water, honey fuses into the bloodstream in 7 minutes. The free sugar molecules in it make the brain function easier…

Does not accommodate bacteria: This bacteria killing property of the honey is named as the “inhibition effect”. The experiments conducted on honey resolve that, its bacteria killing property increases twice when diluted with water. It is very interesting to note that the newborns in the bee colony are nourished with diluted honey by the bees responsible of their supervision – as if they know this feature of the honey.

Royal Jelly: Royal jelly is a substance produced by worker bees inside the beehive. Inside this nutritious substance, there exist sugar, proteins, fats and many vitamins. It is used in problems which occur as a result of tissue deficiency or body frailty.

It is obvious that honey, which is produced in much higher amounts than the requirement of the bees, is made for the benefit of man. And it is also obvious that bees cannot perform such an unbelievable task “on their own”…

Most Read Posts in the last 24hrs